Is skating really unfair? Yes, even in extra stringent analysis

This post first appeared on pygaze.org, in October 2015. There is a previous post on the initial analysis, and a next post on data from 100-meter times.

Yesterday, we reported that random variability in the starting procedure of racing sports can bias competitions, even at Olympic events. Not everyone was keen to believe this, and some people have made suggestions for things we should control for. Some even went so far as to criticise our methods. In this post we address all questions, and provide an extra analysis that looks at within-athlete effects of changes in the ready-start interval on changes in race times. This analysis is robust to differences between skaters’ individual qualities, and has causal power. Our results indicate that there still is evidence that random differences in ready-start intervals might bias competitions. At the very least, this calls for future research into the starting procedure of racing sports. Which is exactly what we intended to provoke with yesterday’s publication.

Perspective article in Frontiers in Psychology

Yesterday, we published a Perspective article in the academic journal Frontiers in Psychology. The article made a theoretical point about a potential bias in the starting procedure in some racing sports, including speed skating. We explained about the alerting effect, that makes people quicker to respond when they are just alerted:

The starting procedure in racing sports closely resembles a classical experiment, where participants receive an alerting cue before having to respond to a target stimulus.The cue is a general, non-spatial signal that precedes the target stimulus by a variable interval. In the lab, participants are quicker (Posner and Boies, 1971; Adams and Lambos, 1986) and more precise(Klein and Kerr, 1974) to respond after an optimal interval duration of around 500ms, and are progressively slower and less precise after longer durations.

In some racing sports, the referee signals the competing athletes to get ready, and fires the starting shot after a certain interval. We refer to this as the ready-start interval. The crucial point is that this interval is variable. It depends on how quick athletes assume their starting position, but also on regulations that specifically call for variability. The latter is true in speed skating. In addition, speed skaters compete in pairs, and whoever ends up with the lowest total wins the gold. Crucially, each skater starts with different ready-start intervals.

What we show, is that ready-start intervals and race times correlate. And the effect was quite large at that: several hundreds of milliseconds. That does not sound like much, but can make a real difference in racing sports. Enough, in some cases, to mean the difference between winning the gold, and not winning a medal at all! 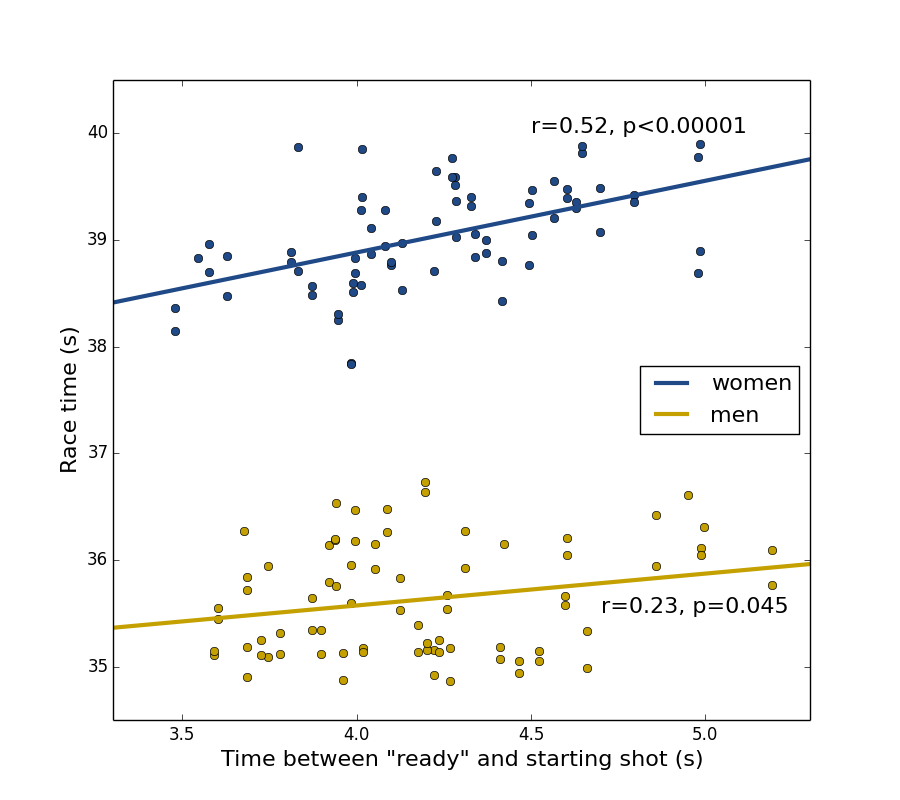 The longer a referee waits between “Ready” and “Start”, the slower athletes finish!

Lots of attention for our article…

The story got picked up by media and was reported on in newspapers, websites, and radio shows in several countries. In the Netherlands, where Dutch people live, reporting was especially pronounced: Beorn (second author and former speed skater) even made it to national television. There are two things you should know about the Dutch: they love speed skating, and they are a naturally sceptic kind of people. This quality makes them very good at evaluating science, and so they did: Mere minutes from publication, I was already receiving emails from colleagues that suggested further analyses, and what kind of control studies could be run. This was great! Post-publication discussion of the starting procedure is exactly what we wanted!

In addition to the constructive comments, some people simply dismissed our findings. Some did so because they simply “do not believe them”, but some had more substantiated criticisms. The most prevalent of these was that we relied on what is essentially a correlation between ready-start intervals and race times. As we have al heard, correlation does not imply causation! What people argued was that the causality might be opposite: maybe good skaters take less time to get ready, and thus have shorter ready-start intervals!

In addition, some people argued that we should not have been using a correlation in the first place, because our data included at most two data points from the same athletes. The assumption here is that the data points coming from the same athlete might cause non-independence in our data set. At least, that is what I assume they meant, because they did not do a very good job at explaining their point. They also did not make any suggestions about what would be the appropriate analysis, and they hid behind an anonymous website. Furthermore, they did not contact us before publication, and they fail to recognise that our manuscript has passed scientific peer review, which should vote for its methodological and statistical soundness. Instead, TopSport Topics decided to post a rather shallow discussion of our paper, that came to a very strong conclusion, without more than simply handwaving towards potential issues.

From the previous paragraph, you might conclude that we were a bit upset. And we were. But not because they criticised us! Other people have contacted us about similar issues, and we had very good discussions about our data. For example, Prof. Lex Borhans of Maastricht University contacted us with the question highlighted before: what direction was causality in? Were skaters really quicker due to shorter ready-start intervals, or could it be that good skaters assume their starting positions quicker and thus have shorter ready-start intervals? I should note that Lex was not the only one asking this question, but he was the only one (to my knowledge) that wanted to write a blog post on it. He asked for our data, and we were very happy to send it over for Lex to re-analyse. The resulting blog post can be found here.

We have to go deeper!

So we set out to do what every scientist does when they are being critiqued: we dove back into our own data, and we scienced the shit out of it. The results are presented below.

One analysis to rule them all

We want to be absolutely clear about our methods here, so here they are. We excluded all skaters that fell or nearly fell during their race, and also those that did not complete one of either. These are Mitchell Whitmore (nearly fell in first race), Maciej Biega (nearly fell in second race), Shani Davis (gave up after first race), Annette Gerritsen (fell in first race), and Yulia Nemaya (fell in second race). Falls or near falls have such a massive impact on race time that they obscure everything else, including athletes’ talent and training, but also the effects of ready-start intervals. Therefore we strongly feel that we should exclude these races from further analysis. For all remaining skaters, 70 in total, we calculated the difference between the first and the second race (race 1 minus race 2) in both their ready-start interval and their race time. We combined the data for men and women, because we have no theoretical reason to split them up, because their individual differences are on the same scale (unlike their race times), and because we need the sample to be sufficiently large for any regression or correlation to be sensitive enough to pick up the effects that we predicted.

In the current dataset, assuming a linear relationship, one extra second of ready-start interval difference caused 174 ms of difference in race times. Both the explained variance and the magnitude of the effect are less than what we demonstrated in the analysis in our article. This means that at least some variance in that data can be explained by what several people, including Lex, suggested: quicker skaters are quicker to assume their starting position, and thus have shorter ready-start intervals. However, we can still explain 12% of the variance, whereas this should be 0% in a fair competition. And the remaining effect of 174 ms of added race time per extra second of ready-start interval is still very worrying in sports where the difference between winning gold or silver (or nothing!) can sometimes be only a few milliseconds. 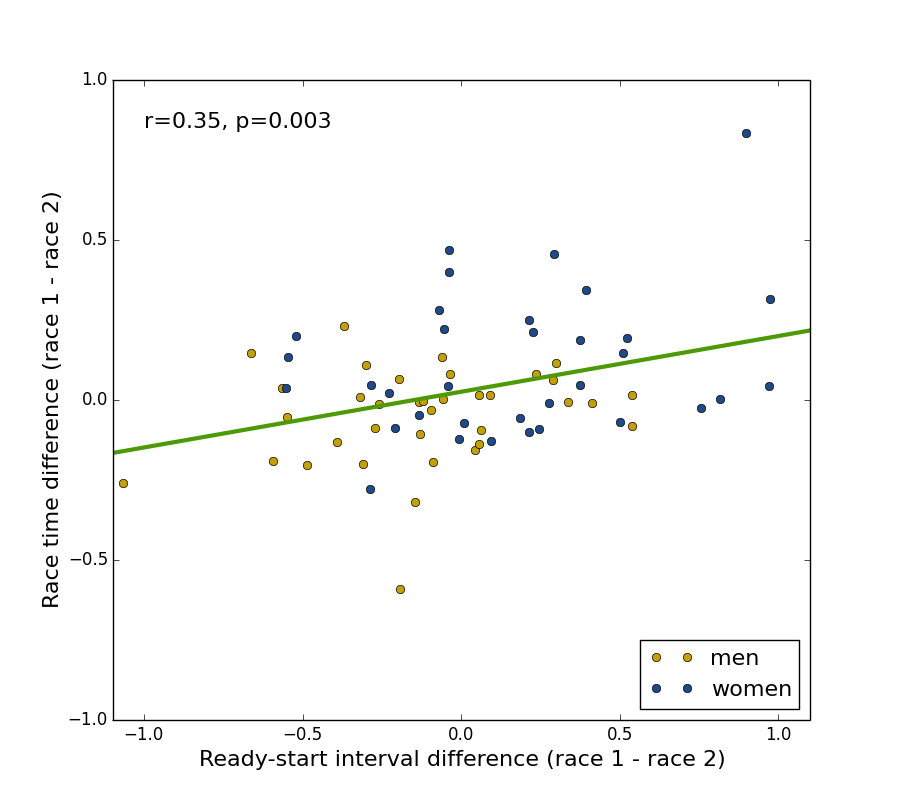 Shorter ready-start intervals do cause shorter race times, even when controlling for confounds.

Is this sample too small?

After collecting data and computing a correlation, you can calculate the statistical power of your results. Ours is 91.42%. That number indicates that our sample was big enough to reliably test the effect that we found.

What happened to the differences between men and women?

They are not there in the current analysis, with the individual Pearson R for men being 0.21, and 0.26 for women. This means they were likely due to noise in the men’s analysis from our article.

The most sceptic of people might now argue something along the lines of the following: “But wait a minute… Maybe skaters that are very good are both more constant in assuming their position (and thus their ready-start interval), and in their race times! So you ARE wrong! HA!“. In that case, one would still expect the minor differences you assume to correlate in the same direction. So they should still be picked up by our regression. In other words: our concerns with starting procedures still hold.

The theoretical issues that we put forward in our article are valid, and the data we provided to support our claims are still valid. This is after we corrected for skaters’ individual qualities, and using a regression on within-participant differences from which causal inferences can be made. Our article was a Perspective, which are intended to highlight important areas of future research. Our article and the discussion following its publication illustrate precisely that: There is a need to thoroughly investigate the starting procedure of racing sports, and speed skating in particular.

If you have any comments, objections, compliments, or tips for funny cat videos, please post them in the comment section below. You can also direct them to me directly, using my email address: edwin.dalmaijer@psy.ox.ac.uk.